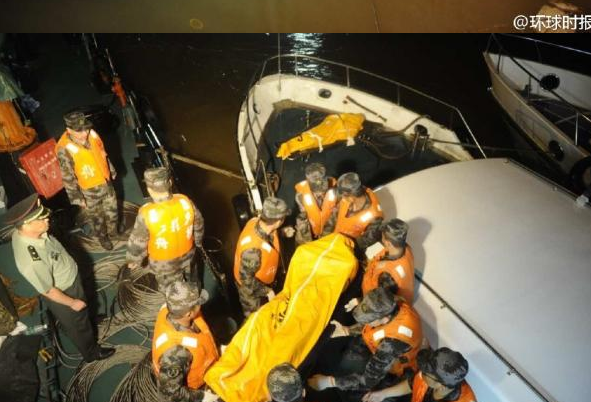 Divers on Tuesday pulled three people alive from inside a capsized cruise ship and searched for other survivors, giving some small hope to a great tragedy with well many people still missing on the Yangtze River. Those brought to safety stood were 15 and at least five people were confirmed dead after the ship capsized during a storm Monday night with 458 people aboard. The cruise was from Nanjing to the southwestern city of Chongqing, and many of those aboard were elderly.

Some of the survivors swam ashore, but others were rescued more than 12 hours after the ship went down, after search teams climbed aboard the upside-down hull and heard people calling out from within. Rescuers in orange life vests climbing on the upside-down hull, with one of them lying down tapping a hammer and listening for a response. Divers pulled out a 65-year-old woman and, later, two men who had been trapped. Other survivors include the ship's captain and the chief engineer.

The ship had floated about 3 kilometers downstream before coming to rest close to the river shore, where rapid waters made the rescue difficult. The location is about 180 kilometers west of the Hubei provincial capital of Wuhan. The fact that the capsized ship drifted downstream was a good sign for rescuers because it meant there was enough air inside, and could mean there are enough air pockets for survivors to breathe.

The captain and the chief engineer said the ship sank quickly after being caught in a cyclone. It is said the four-level ship had been carrying 406 Chinese passengers, five travel agency employees and 47 crew members. Most of the passengers were 50 to 80 years of age.

Several rescue ships were searching the waters, and divers had arrived. The rescue personnel were trying to determine whether they could right the sunken ship. More than 50 boats and 3,000 people were involved in search efforts.