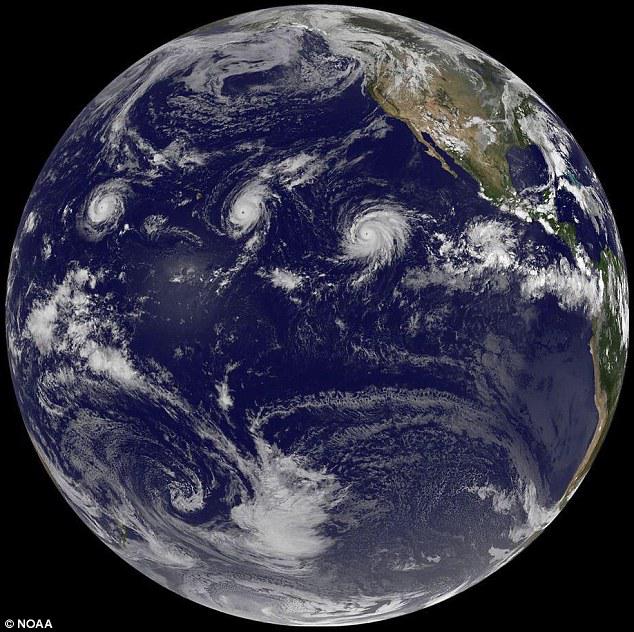 Three major hurricanes are simultaneously making their way across the Pacific Ocean for the first time in history.

Hurricanes Ignacio, Kilo and Jimena were pictured together by NASA and astronauts from the International Space Station this weekend. It is the first time that three storms classed as Category 3 or higher, meaning they have the potential to cause major damage, have been pictured together at the same time. Meteorologists said the presence of all the storms at the same time was likely down to this year’s El Nino event, which is expected to be much stronger than usual.

Ignacio is now expected to weaken further and could become a tropical storm by tomorrow as it moves to the north of Hawaii. At its peak, the storm threatened winds of 134mph, though forecasters always said it was unlikely Ignacio would make landfall.

Jimena, located in the midst of the east Pacific, is the most powerful of all the storms. It keeps up winds in excess of 140mph and is expected to remain at that strength until the middle of the week.

Kilo, located to the southwest of Hawaii, also has maintained top winds of 140mph but is sitting far out into the ocean and is not expected to come anywhere near land.

Forecaster Dennis Feltgen told USA Today: “An El Niño year usually means above-average activity in the Pacific, and this year is no exception.” According to the Australian Forecasting Service, another reason for multiple storms appearing could be that ocean temperatures across the Pacific are up to 2℃ higher than usual in places.

Elsewhere in the Atlantic, Hurricane Fred swept over the Cape Verde islands yesterday, downing trees and causing flooding. The storm, which caused the first hurricane warning to be issued in Cape Verde since 1892, hit with 85mph winds and poured 10 inches of rain.

The National Hurricane Center said it was rare for a storm to form so close to the coast of Africa. It is expected to gradually weaken later today.