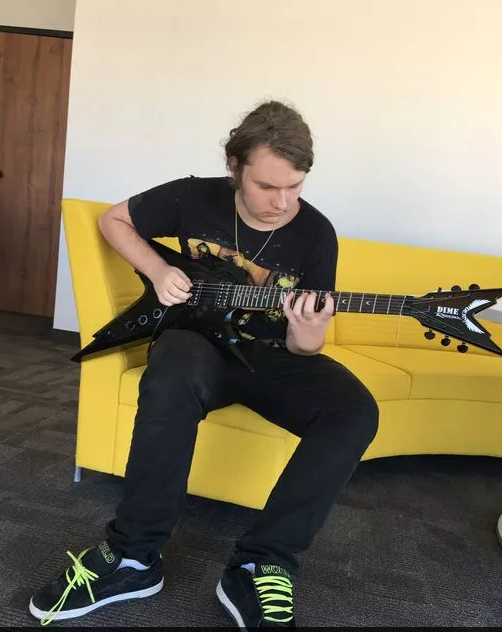 When 16-year-old Johnny Crow first saw his new Dean Razorback guitar, he was in disbelief.  When he realized it was a birthday gift from his late father, he was both heartbroken and elated. “I was happy that my father gave me one last thing to remember him,” said Johnny Crow. “I know a lot of kids don't get that.”
His dad, John Crow, died at age 49 following a heart attack in their home April 1. Peter Kruse, owner of the Port Huron Music Center, said John Crow ordered the guitar in January to make sure he got the exact model his son wanted for his birthday.
Chandler Crow, Johnny Crow’s sister, took a video of her brother getting the guitar at Port Huron Music Center on Wednesday, his 16th birthday. She shared it on Facebook, and by Thursday afternoon it had been watched more than 5.4 million times.
“It's a real positive thing to be a part of,” Chandler said. “It was a really emotional day for all of us here ... an amazing experience, amazing the world has found it equally as amazing as we did.” Some shared stories of their own losses and wished Johnny a happy birthday.  The majority were positive and supportive. The teen said the well wishes and shared stories of grief have helped him.
He was with his dad when he had his heart attack and performed CPR before rescue crews arrived. Johnny said seeing his dad in the hospital after doctors' efforts ended was challenging.  “It's good to feel you're not alone in this,” Johnny said.  He said he bonded with his dad through music. Johnny said music helped him get through emotional times.  “I discovered music and it was amazing how it made me feel,” he said. “It made that sadness go away, and it made me more like my father.”