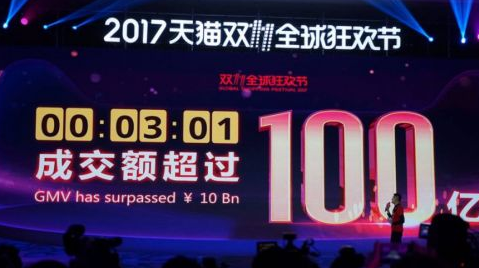 China’s e-commerce giants broke their yearly “Double 11” record this year once again among the country’s shopping frenzy. Alibaba Group takes the leading place in sales and its rival(对手) JD.com catches up.
Sales of Alibaba related platforms hit 168.2 billion yuan in 24 hours, a 40% rise from a year ago. JD.com also reported an impressive 127 billion yuan daily sales in this year’s festival.
The “Double 11” event is also called “Single’s Day” event. It’s started in 2009 by Alibaba’s Tmall brand store for its customers to feel less lonely. Now it has become the world’s largest online shopping festival in terms of scale, with more sales than the American “Black Friday” and “Cyber Monday” combined.
During the 24-hour period of Saturday, Alibaba recorded a total 1.48 billion transactions in both of its Taobao market place and Tmall brand store. It got a fast start with some 46.6 billion worth of goods sold in the first 30 minutes of the event.
Mobile users were engaged during this year’s festival, as some 90% of the total sales were made on mobile devices, Alibaba said. That was up from 82% in 2016 and 69% in 2015.
_______ Many new words were produced after that, such as hands-chopping people, which means this kind of people love shopping online very much and they spend a lot shopping online. Many people stay up late in the hope to be the lucky dog of the flash sale. There is even joking that November 11th should be set as a world festival and all people should take that day off.
本时文内容由奇速英语国际教育研究院原创编写，未经书面授权，禁止复制和任何商业用途，版权所有，侵权必究！（投稿及合作联系：028-84400718  QQ：757722345）
请先登录
最新评论
点击显示
本文翻译请先完成本篇阅读