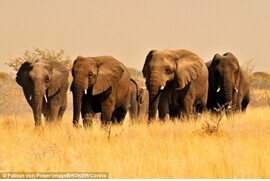 Elephants are known for their impressive memories, but they are also skillful meteorologists, a new study claims. Researchers say the large animals can detect an approaching rainstorm up to 150 miles (241km) away. And they think elephants’ forecasting abilities could be used to help conservationists monitor herds to keep them safe from predators.

Unsurprisingly, considering the size of their ears, elephants have good hearing and can detect very low frequencies, PopSci reported.  Scientists believe the creatures can hear low rumbles of thunder and the sound of heavy rain miles away to predict when wet weather is approaching. They came to this conclusion after studying herds of elephants that suddenly moved in Namibia. The behavior has previously not been explained, according to the study.

Three years ago, scientists found that older elephants are best at making decisions about predators, because they remember similar situations they have met before. When families were played male or female lion roars from a loudspeaker – imitating their presence - those with older female heads correctly focused their defensive reactions on male lions that are the more skilled killers.

Oliver Frauenfeld, a geology professor at Texas A&M University said: “They’ve been observed to change the places they go and the speeds they go rather quickly.”

To uncover what caused such movement, Professor Frauenfeld and his team studied the movements of nine elephants wearing GPS trackers belonging to different herds – for a total of seven years. They found that the elephants constantly change course during the rainy season in Namibia, between January and March. The experts observed that the elephants could “sense” that were hundreds of miles away to predict and move towards the rainstorms.

Professor Frauenfeld said, “They need the rain. After a long dry season, once the elephants hear the rain, they start moving towards it and it allows them to get the water sooner.” He thinks that knowing how elephants chase storms will help conservationists predict their movements and guard them from predators.