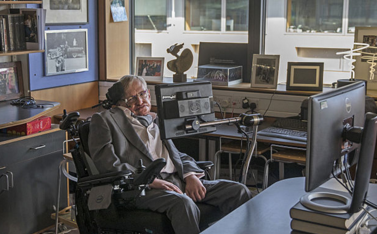 Stephen Hawking died at the age of 76, his family said. The British theoretical physicist was known for his groundbreaking work with black holes and relativity. And he was the author of several popular science books including A Brief History of Time.
His children, Lucy, Robert and Tim, said, "We are deeply saddened that our beloved father passed away today. He was a great scientist and an extraordinary man whose work and legacy(遗产) will live on for many years." They praised his "courage and persistence" and said his "brilliance and humour" inspired people across the world.
Stephen Hawking, who was born on 8 January 1942 in Oxford, England, earned place at Oxford University to read natural science in 1959, before studying for his PhD at Cambridge. By 1963, he was diagnosed with motor neurone disease and given two years to live. He outlined his theory that black holes emit "Hawking radiation" in 1974. He published his book A Brief History of Time in 1988, which has sold more than 10 million copies. His life story was the subject of the 2014 film The Theory of Everything.
本时文内容由奇速英语国际教育研究院原创编写，未经书面授权，禁止复制和任何商业用途，版权所有，侵权必究！（投稿及合作联系：028-84400718  QQ：757722345）
请先登录
最新评论
点击显示
本文翻译请先完成本篇阅读