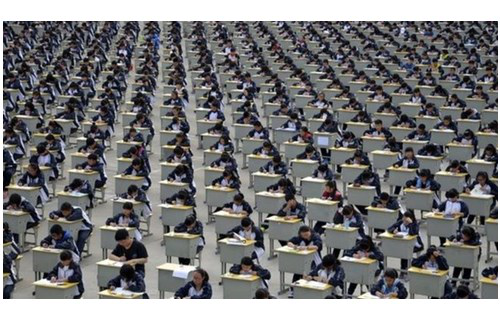 The University of New Hampshire will become the first state university in the US to accept the Gaokao — a standard Chinese college entrance exam similar to the SAT — in an effort to attract more foreign students. The BBC reports that nearly 10 million students took the nine-hour exam last week.
During the 2015-2016 school year, almost 330,000 Chinese students were studying in the US, the largest number of any foreign country, and that figure is thought to be closer to 375,000 for the academic year that just ended.
BBC Chinese Service Editor Howard Zhang wrote this about the Gaokao: Gaokao literally means High Exam. It refers to the yearly National Higher Education Entrance Exam in China, similar in format to the SAT in the United States.
Millions of Chinese high school students who sit through this highly competitive multi- subject exams each year see it as a life-defining moment. Graduates who make it into top universities often end up in top companies and with good careers. Those who fail to enter university are often condemned to a life with little prospects.
There are already many universities in Canada, England and other countries who accept the results of the Gaokao. A percentage of Chinese students also pay to take a private, international exam that is accepted by many American colleges.
本时文内容由奇速英语国际教育研究院原创编写，未经书面授权，禁止复制和任何商业用途，版权所有，侵权必究！（投稿及合作联系：028-84400718   QQ：757722345）
请先登录
最新评论
点击显示
本文翻译请先完成本篇阅读