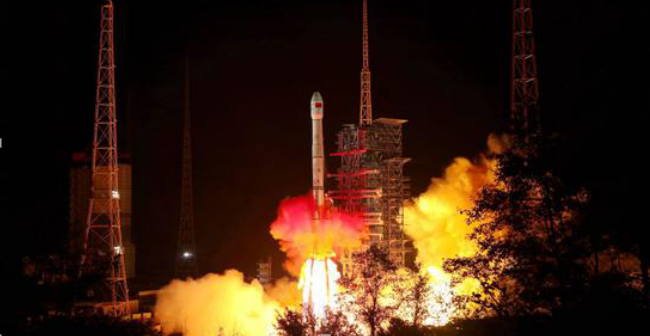 China is only the third nation to carry out a lunar landing, after the United States and Russia. And it’s ready to become the first country in the world to explore the far side of the moon with the launch of a lunar rover Saturday.
The Chang’e 4 lunar mission lifted off from the Xichang Satellite Launch Center on the early morning of December 8, 2018. It’s expected to land in early January after 26 days of flight, said China’s Aerospace Science and Technology Corp.
The lander will observe whether plants will grow in the low-gravity environment and explore whether there is water or other resources at the poles. Another function of the mission is to study the interaction between solar winds and the moon surface using a new rover.
“Since the far side of the moon is shielded from electromagnetic interference from the Earth, it’s the best place to research the space environment,” said Tongjie Liu, director of the Lunar Exploration and Space Program Center. Because the far side of the moon is free from interference from radio frequencies, the mission requires a relay satellite to transmit signals that was launched into place this year.
The Chang’e 4 rover is 1.5 meters long and about 1 meter wide and tall, with two solar panels and six wheels. China’s last lunar rover named Yutu stopped operation in August 2016 after 972 days of service on the moon’s surface as part of the Chang’e 3 mission. The overall design of the new rover is inherited from Yutu. “We worked hard to improve its reliability, conducting thousands of experiments to ensure its long-term operation, especially taking into consideration rocks and frictions on the Moon,” Wu Weiren told state broadcaster CCTV in August.