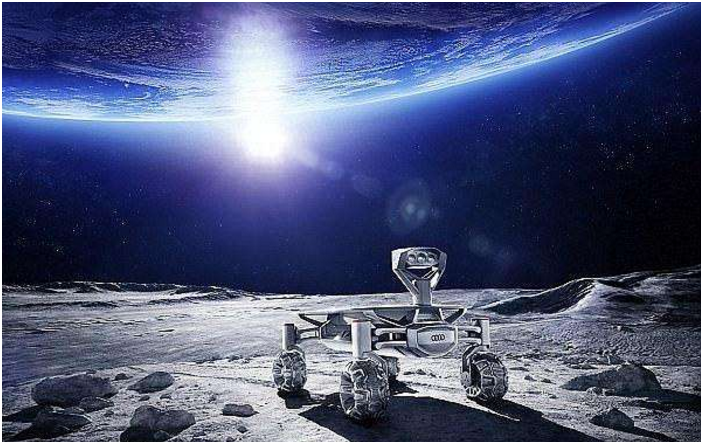 There are many places on Earth where you can regularly hear the screams of people unable to get a good signal. Hopefully the mobile networks will eventually figure that out. But Vodafone is clearly a little distracted as it prepares to create a 4G network on the moon.
The mission to set up 4G on the moon is being started by German space company PTScientists, whose goal is to bring down the cost of doing research in space. PTScientists has already developed a spacecraft capable of carrying 100kg of payload to the moon.
Part of that payload next year will be a space-grade network weighing less than a bag of sugar developed by Nokia in conjunction with Vodafone. Audi is also involved in getting this first privately-funded Moon landing to happen.
The reason why a 4G network is being installed on the moon is data transfers. Two Audi lunar quattro rovers will also be landed there and intend to study NASA’s Apollo 17 lunar roving vehicle. The rovers will capture both HD video footage and scientific data, which can be transferred using the 4G base station and beamed down to Earth. The network will also allow the rovers to communicate with each other easily.
Last year, China and Europe were in talks to build a moon base and I'm sure they'd be happy to arrive to an already working 4G network. Jeff Bezos is also planning moon deliveries by 2020 and a 4G signal should allow him to get those “your order is being delivered today” text messages through to Amazon Prime (on the moon) subscribers.
本时文内容由奇速英语国际教育研究院原创编写，未经书面授权，禁止复制和任何商业用途，版权所有，侵权必究！（作者投稿及时文阅读定制请联系微信：400-1000-028）
请先登录
最新评论
点击显示
本文翻译请先完成本篇阅读