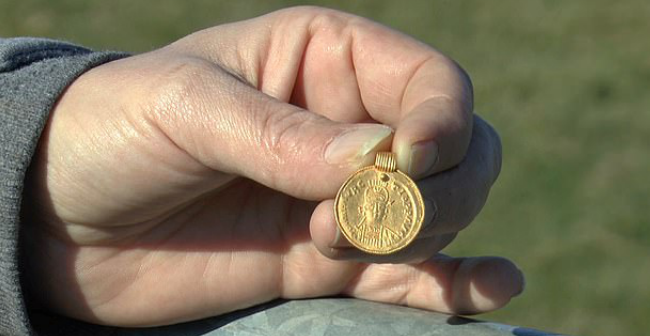 An amateur metal detectorist has compared finding a 6th century Anglo-Saxon pendant in a muddy field to winning the lottery. The shiny piece of gold was originally mistaken to be a chocolate coin due to its immaculate preservation but experts proved it is a gold pendant from 1,500 years ago. Rachel Carter was searching a Kent field with her partner and her metal detector found it. After showing the coin to her partner they realized what she had mistaken to be a piece of junk was in fact a piece of British history.
Ms Carter said, “As soon as I put the detector down, I got a signal that was going mad so I dug down and pulled out this. It was only about five inches down and was so perfect and gold and new-looking that at first I thought it was a bit of junk—you’d think you could unwrap it and eat the chocolate from inside.”
“I went over to Ricky and said ‘Do you know what this is?’ and he was like ‘Oh, my God.’” Ms Carter and her partner, Ricky Shubert, said it was a sign from her mother who passed away nearly a year before the discovery. She restarted the hobby after caring for her elderly mother and made the find at Christmas. “Some people in my club have been digging for 50 years and they say they’ve never seen anything like it.”
“My mum always said to me ‘One day you’ll find something really special.’ All I ever wanted was to find something gold and religious for her—because she was Catholic—and then I did. It’s like she sent this as a sign, saying ‘See? Keep going.’ We’ve been back a few times since then, and haven’t found anything. Usually you find caps, coins, that sort of thing—but we’ve found absolutely nothing since. It’s really weird.”