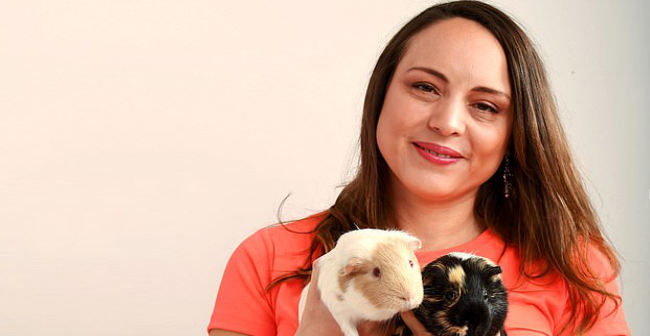 This time last year, Tammy Lovell hit rock bottom. Having survived a tough divorce, she was consequently thrust into the chaos of single motherhood, making even the smallest work  commitment seem impossible. “I was anxious, forgetting things and struggling to concentrate at work, my heart was constantly racing. My doctor diagnosed me with acute reaction to stress and signed me off work for two weeks,” she recalled.
But it wasn’t a course of pills or bottles of wine that brought her down from the ledge. Her unlikely medicine would instead come in a special form. Tammy had never paid a great deal of attention to her children’s pet guinea pigs, which she had bought as a gift for eldest daughter Maisie in 2017. But now that Tammy was confined to her home, Bubble and Squeak were suddenly all the more prominent. Over a number of days, their gentle nibbling sounds and the touch of their soft fur began to have a surprising effect on Tammy’s mental health. “I’d sit and watch them interact and it was almost a meditative experience,” she said. “I could actually feel my heart rate and breathing slowing down and becoming calmer. Gradually, after spending time watching them, I found my stress reduced.”
Journalist Tammy now works from home and spares at least 15 minutes most days to watch the pair play. “The guinea pigs encourage me to take time out for me. It helps me to stay in the present moment.”
Indeed, she is one of thousands of Britons who rely on “pets” to ease a whole manner of mental health problems. Among them is the Duchess of Cambridge’s brother James Middleton, who credits his spaniel Ella for helping him through bouts of depression and attention deficit disorder. And Oscar winner and nervous flyer Natalie Portman rarely travels by plane without the calming company of her dog Whiz.