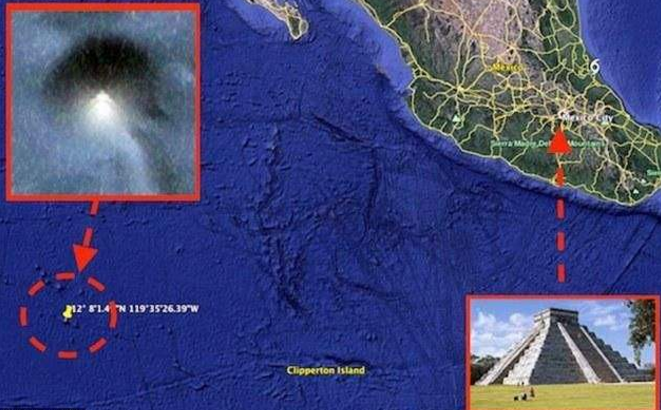 Humans have yet to explore the deep wonders of the sea, but a recent find suggests aliens may have already beaten us to it.
Deep below the Pacific Ocean lies what one Martian researcher has taken as “a perfect pyramid”. Using Google Earth, this big structure appears to be 8.5 miles across and some say it could be a UFO parked underwater or a large alien base.
Marcelo Igazusta, a researcher in Argentina, was the first to lay eyes on the mysterious underwater structure, which was discovered last month. Using the coordinates 12°8'1.49 'N 119°35'26.39' W, Igazusta claims to have seen a beam of light shining from the darkness of the Pacific Ocean just west of Mexico—leading him to this discovery.
Well-known alien hunter, Scott C Waring, picked up the discovery today and shared it with his followers. “It’s a perfect pyramid that measures 8.5 miles across one side of its base,” Waring writes in his blog UFO Sightings Daily. “That's an underestimate. It could be up to 11 miles across.” Waring explains that this “perfect pyramid” is close to the ancient Mayan and Aztec pyramids in Mexico.
Although the ancient pyramids were built by humans, Waring says only aliens could make such a big structure, referring to the one underwater. “Even if this is not a UFO that landed in the ocean that was being used as an alien base, it is still an important discovery,” he writes. “An 8.5 mile pyramid... biggest the world has ever known.”
本时文内容由奇速英语国际教育研究院原创编写，未经书面授权，禁止复制和任何商业用途，版权所有，侵权必究！（作者投稿及时文阅读定制请联系微信：400-1000-028）
请先登录
最新评论
点击显示
本文翻译请先完成本篇阅读