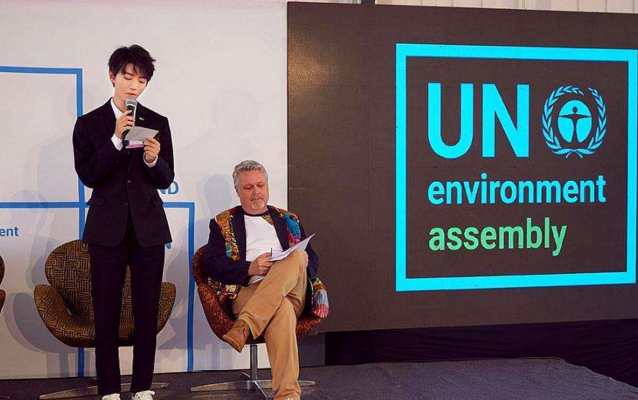 A fine example has endless power. As a pop idol, he is extremely popular in Asia with more than 70 million followers on Weibo. As a role model, he was appointed by the United Nations Environment Programme as the UN Environment National Goodwill Ambassador in April 2018.
The example mentioned above is Chinese singer and actor Wang Junkai, or Karry Wang, the leader of TFBOYS. As UNEP’s youngest ambassador, Wang attended a UN meeting in Kenya on March 14. He delivered a speech in English at the UN Sustainable Fashion Alliance conference.
In an interview after the meeting, Wang said that he would like to spread the concept of environmental protection around the world, and to build a better sustainable future for all mankind and our planet.
In fact, it’s not the first time that Wang has contributed to raising awareness of environmental issues. In 2016, Wang widely shared the wild for life campaign, reaching 400 million viewers. A year later, he publicly spoke out on the urgent need to protect endangered wildlife. He named them the “superstars of the planet”.
Apart from drawing attention to wildlife, the 19-year-old also called on his fans to pledge to reduce e-waste. Within 24 hours, his post was shared 1.67 million times, and more than 400,000 followers signed the pledge.
According to Wang, young people are no longer merely onlookers when it comes to environmental action; nor should they be. “I will spare no effort to do everything I can to take care of our earth. And I invite everyone to join me in generating a wave of positive action,” he said.
本时文内容由奇速英语国际教育研究院原创编写，未经书面授权，禁止复制和任何商业用途，版权所有，侵权必究！（作者投稿及时文阅读定制请联系微信：400-1000-028）
请先登录
最新评论
点击显示
本文翻译请先完成本篇阅读