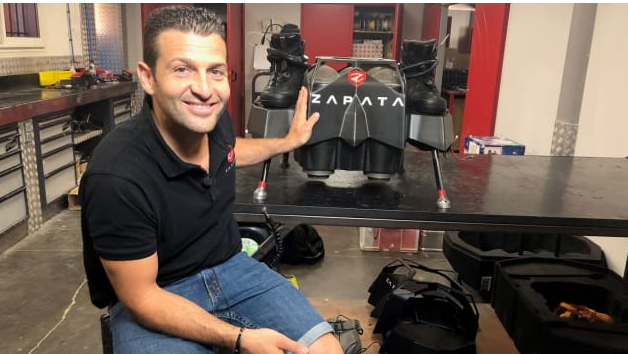 Franky Zapata has been driven by a single dream since he was little: being able to fly. Not in an airplane, he says, since the windows function like a screen, but like a bird. As the French inventor was born colorblind, that ruled out learning to fly helicopters. So after several years spent racing jet skis, he invented hydrojets which allowed him to at least hover above the water.
Then improvements in technology allowed him to go further, cutting the hydrojet from its tether and taking to the air. "When you fly with your body," says Zapata, "even your hands affect the direction you want to go in. You feel the air through your fingers. It's like becoming a bird. But it's also very hard. I have to fight against the wind with my legs so there's pain too. It's not as peaceful as it looks."
Last Sunday the 40-year-old former jet-ski champion took to the skies above Paris at the Bastille day parade, capturing the world's imagination with a board that can reach an altitude of nearly 500 feet—with the potential to go much higher and a speed of 140 kilometers per hour. Back in his workshop near Marseille, Zapata says while he enjoys showing his creation off to a crowd, what he really loves is flying alone. "It's wonderful when I'm flying around the Arizona desert, through the mountains. That's why I built this machine," he says. "In my heart the best thing is the freedom."
Already, he has worked with the US and French militaries, with the French investing 1.4 million dollars in tests of the board. "If the question is do I think I will sell this to special forces all over the world, the answer is yes. When? I don't know," says Zapata. As for commercial uses, he says that regulations need to be worked out and safety issues looked at before the technology can be put to wider use.
本时文内容由奇速英语国际教育研究院原创编写，未经书面授权，禁止复制和任何商业用途，版权所有，侵权必究！（作者投稿及时文阅读定制请联系微信：400-1000-028）
请先登录
最新评论
点击显示
本文翻译请先完成本篇阅读