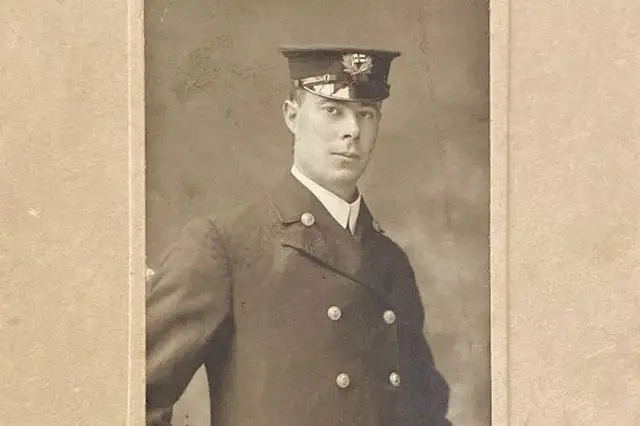 An archive belonging to Harold Lowe the “true hero of the Titanic” is set to make up to £60,000 at auction（拍卖）. Included in the sale is a telescope inscribed by a survivor “to the Real Hero of the Titanic”, with a price of £20,000. A photo of officers on rescue ship Carpathia is priced at £10,000. Mr Lowe's officer's whistle is one of the rare items going up for sale.
Harold Lowe helped lots of women and children into lifeboats. The fifth officer went back for survivors after the ship sank in 1912. He was played in the 1997 film by Ioan Gruffudd. Mr Lowe, of Barmouth, Gwynedd, died in 1944.
Andrew Aldridge said, “He was without doubt one of the heroes of the Titanic disaster. After Titanic hit the iceberg, he displayed a cool and calm manner under pressure. As he loaded women and children in the lifeboats, it is said that he ordered J.Bruce Ismay, the managing director White Star Line, to get out of his way, telling him 'you will have me drown the lot of them' if he didn't. He left Titanic on lifeboat 14. After his crew rowed about 150 yards from the sinking, Lowe got five lifeboats together and helped passengers share them again. He then went back to pick up any survivors, the only lifeboat to do so with the others believing it to be too dangerous as the survivors would make the boats sink. Mr Aldridge added, “He is honored as the officer who went back."
本时文内容由奇速英语国际教育研究院原创编写，未经书面授权，禁止复制和任何商业用途，版权所有，侵权必究！（作者投稿及时文阅读定制请联系微信：18980471698）
请先登录
最新评论
点击显示
本文翻译请先完成本篇阅读