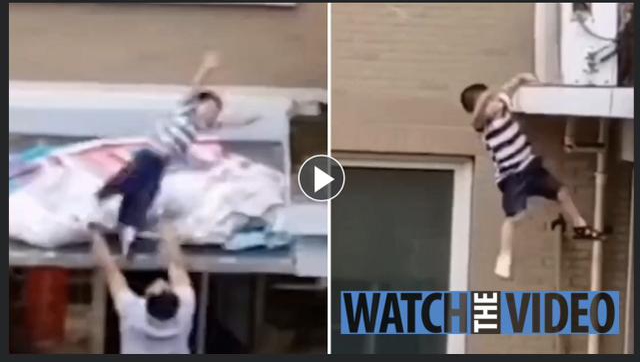 This is the heart stopping moment. A hero saved a boy from certain death after he fell from the fifth floor of an apartment block. The chilling scene happened in the county of Xuyi in Huai'an City in East China's Jiangsu Province. According to local reports, the boy was home alone when he locked himself in his bedroom. He then used a stool to climb out of the bedroom window.
In the video, witnesses breathed heavily as the boy ends up clinging to a ledge used to hold air-conditioning units. He then lost his strength and fell down to the ground, landing on blankets placed on a glass awning before he bounced into the waiting arms of neighbour Li Dehai.
Mr Li said the boy was taken to the county hospital and not found to have suffered any serious injuries thanks to his life-saving actions. He added, "After I saw the boy hanging there, I got one of my blankets and four of us stood below to catch him. But then I noticed the glass awning and feared he might hurt himself if he fell on that first, so I put the blanket on top and went to get another thicker one."
The video shows that Mr Li was standing on a stool with both arms outstretched when the boy fell. He hurt his arm but no other injuries during his action. Local authorities later found Mr Li and gave him an official award, the Xuyi County Public Security Bureau said.
本时文内容由奇速英语国际教育研究院原创编写，未经书面授权，禁止复制和任何商业用途，版权所有，侵权必究！（作者投稿及时文阅读定制请联系微信：18980471698）
请先登录
最新评论
点击显示
本文翻译请先完成本篇阅读