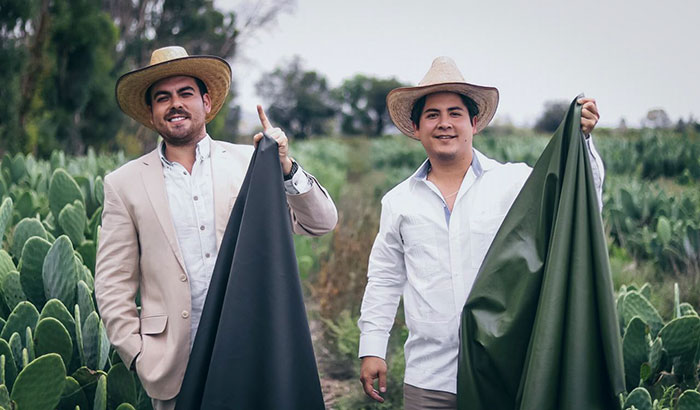 “This is the moment when we must come together to save this planet,” Barack Obama once said. Even though saving the planet can sound like a huge and quite unclear concept, there’s always a small step that each of us can take. We’re talking about two entrepreneurs Adrián López Velarde and Marte Cázarez from Mexico, who developed a method of changing cacti(仙人掌) into vegan leather.
Adrián and Marte were working in the fashion and furniture automotive industries when they realized that environmental pollution is a serious problem and got inspired to do something about it. Friends left their jobs and decided to dedicate a few of their upcoming years to coming up with something amazing that would have the potential to change the world. It took them about two whole years until they finally finished creating their marketable cactus leather in July 2019.
Why cactus? The answer is simple. This plant doesn’t need much water to grow. It’s super resilient and strong and it can handle low temperatures without dying. Besides, it’s Mexico so there’s plenty of cacti there. The vegan leather these guys create is called “Desserto” and it’s the world’s first environmentally friendly organic material made out of Nopal cactus. This material is considered to be highly sustainable and without any toxic chemicals. Besides, the company offers a large variety of colors, thicknesses, and textures.
Adrián and Marte grow their cactus on a farm which is located in the state of Zacatecas. First of all, they find and cut mature leaves of the plant, clean it, mash it, then dry it under the sun for three days, after that they continue to process it so the material can later become a part of their vegan leather formula. One of the best things about this vegan material is that it looks and feels exactly like real leather.
本时文内容由奇速英语国际教育研究院原创编写，未经书面授权，禁止复制和任何商业用途，版权所有，侵权必究！（作者投稿及时文阅读定制请联系微信：18980471698）
请先登录
最新评论
点击显示
本文翻译请先完成本篇阅读