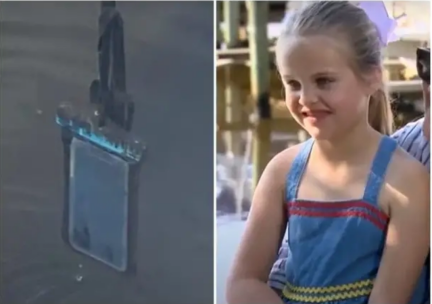 A six-year-old girl Reagan Votaw was fishing with her family in a Maryland river. Suddenly she reeled in a mobile phone in the water. The phone was in a waterproof(防水的) bag from the Severn River. She decided to take it home to see if it was still working.
Votaw’s mother, Emily, said she kept the mobile phone in rice to make it dry and then plugged it in. They were surprised to see the mobile phone still work. Its owner was an eighth grade student, Preston Shapiro. The phone dropped in the river when he was go boating with a friend about a year ago.
A video shows Votaw and Shapiro together as she handed over to him his long lost mobile phone in the waterproof bag. Shapiro gave her $50 for finding his lost phone and bringing it back to him.
本时文内容由奇速英语国际教育研究院原创编写，未经书面授权，禁止复制和任何商业用途，版权所有，侵权必究！（作者投稿及时文阅读定制请联系微信：18980471698）
请先登录
最新评论
点击显示
本文翻译请先完成本篇阅读