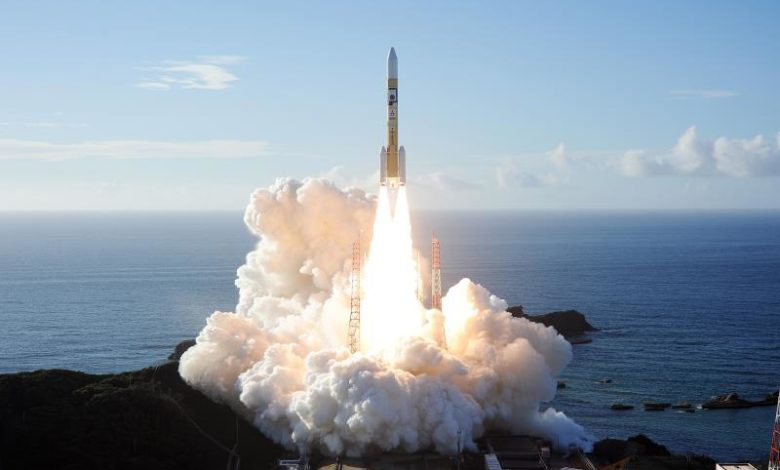 A rocket launched on Monday, July 20th from Japan took the Emirati probe “Hope” into space, which will orbit Mars next February in the first interplanetary mission carried out by an Arab country.
The launch of the Mitsubishi Heavy Industries (MHI) rocket was made at 6:58 local time (21:58 GMT Sunday), when scheduled, from the Tanegashima space center in the extreme south-west of Japan. The 42nd H-IIA series rocket was due to take off last Wednesday, but heavy rains in the area led to the postponement until Friday, and again put off until Monday.
MHI said in a statement that the launch was successful, and its orbit went as planned. 57 minutes after takeoff the separation of the rocket from the spacecraft carrying the probe to Mars was confirmed. The “Hope” probe will travel 495 million kilometers to enter the red planet’s orbit in February 2021, coinciding with the 50th anniversary of the formation of the United Arab Emirates (UAE).
The Emirati mission to Mars is the first in a series of three projects to Mars that will be completed in the coming weeks and that includes other vehicles launched by China (Tianwen-1) and by the United States (Mars 2020). The idea of “Hope” is to study the climate and atmosphere of Mars, in addition to exploring the causes that led to the disappearance of water and the chances of life on the red planet, according to Emirati officials. Ahmad Belhoul al Falasi, the president of the UAE Space Agency, stressed that this Monday’s operation is “a historic milestone” for his country.
For the Japanese firm, today’s launch is the second collaboration project with the Emirati authorities, since in 2018 another MHI rocket placed the Khalifasat observation satellite in Earth’s orbit.
本时文内容由奇速英语国际教育研究院原创编写，未经书面授权，禁止复制和任何商业用途，版权所有，侵权必究！（作者投稿及时文阅读定制请联系微信：18980471698）
请先登录
最新评论
点击显示
本文翻译请先完成本篇阅读