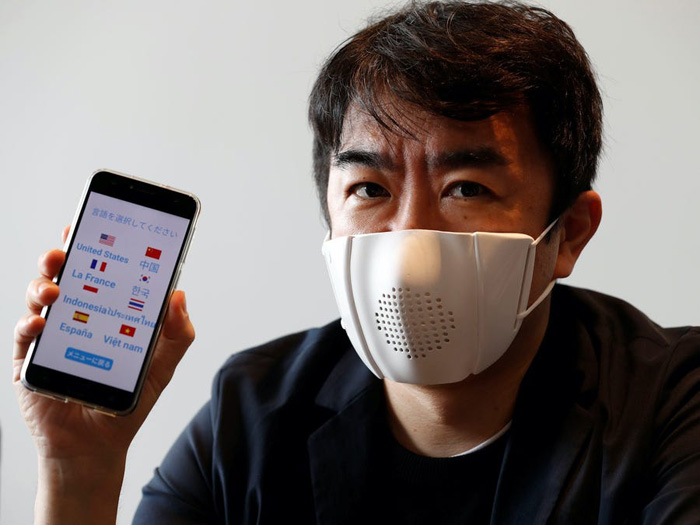 It was only a matter of time before face masks became high-tech. Japanese company Donut Robotics has developed a face mask with "smart" abilities, including the ability to translate what the wearer is saying into eight different languages.
The C-FACE Smart Mask still protects from the spread of COVID-19, but can also translate the wearer's speech from Japanese into Vietnamese, English, Spanish, Chinese, Korean, Thai, Indonesian, and French. It works by connecting to a smartphone app through Bluetooth to translate the words into text messages and can also write down speech and make calls.
Taisuke Ono, chief executive of Donut Robotics, said, “We worked hard for years to develop a robot and we have used that technology to create a product that responds to how the coronavirus(冠状病毒) has changed society.”
The white plastic face mask was developed as the company searched for a product to help them survive the virus. When the virus struck, Donut Robotics had made a deal to supply robot guides and translators to Tokyo's Haneda Airport, but this deal remains up in the air. It is said that each mask will cost about $40. The first 5,000 masks will be sold to Japanese buyers in September before expanding to China, the US, and Europe, too.
本时文内容由奇速英语国际教育研究院原创编写，未经书面授权，禁止复制和任何商业用途，版权所有，侵权必究！（作者投稿及时文阅读定制请联系微信：18980471698）
请先登录
最新评论
点击显示
本文翻译请先完成本篇阅读