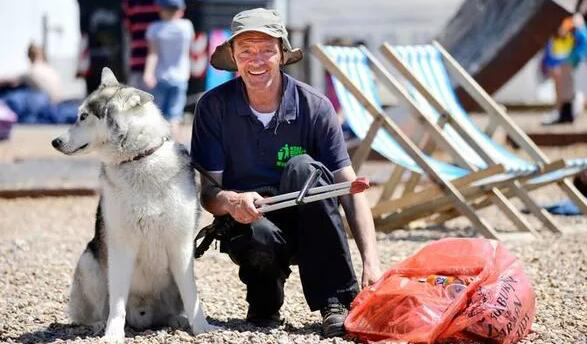 Army veteran Wayne Dixon and his dog Koda have collected 50 tons of rubbish so far on an epic litter pick around Britain.
Wayne, 47, along with Koda, eight, has already filled 10,000 bin bags and the pair are still only half way into their trip along the coastline. They set out from their home in Lancashire almost three years ago and have covered 3,500 miles so far after crossing off Scotland, Wales, Devon and Cornwall. They have now made their way along the South coast to Brighton where Wayne joined a party of litter pickers for the Silent Disco Beach Clean to help remove thousands more discarded items. The pair's series of walks are in memory of Wayne's father John, who died in 2012. Funds are being raised for the mental health charity Mind. John suffered a kind of disease for many years but was an avid walker and loved coastal paths.
Wayne, who is also backed by Keep Britain Tidy, said, "You would think the environmental message about the harm caused by littering would have hit home by now but people still discard rubbish on the beaches which then gets washed out to sea causing marine pollution. I'm halfway through my journey round the coast of Britain and I've been astonished with how much rubbish I have picked up. It is truly shocking that the message is still not getting to some people."
Amy Gibson, organiser of the Brighton clean-up, said, "Over 100 volunteers joined in and in just two hours we removed over 60 kilos of litter from the area in little over half a mile. Over 50,000 people visited Brighton beach on Saturday—the hottest day of the year so far—and we are in desperate need of more bins down there and for people to start taking ownership of their trash."
On his epic journey, Wayne has been giving talks to children in schools and community groups about the need to drum home the environmental message and stop littering.
本时文内容由奇速英语国际教育研究院原创编写，未经书面授权，禁止复制和任何商业用途，版权所有，侵权必究！（作者投稿及时文阅读定制请联系微信：18980471698）
请先登录
最新评论
点击显示
本文翻译请先完成本篇阅读