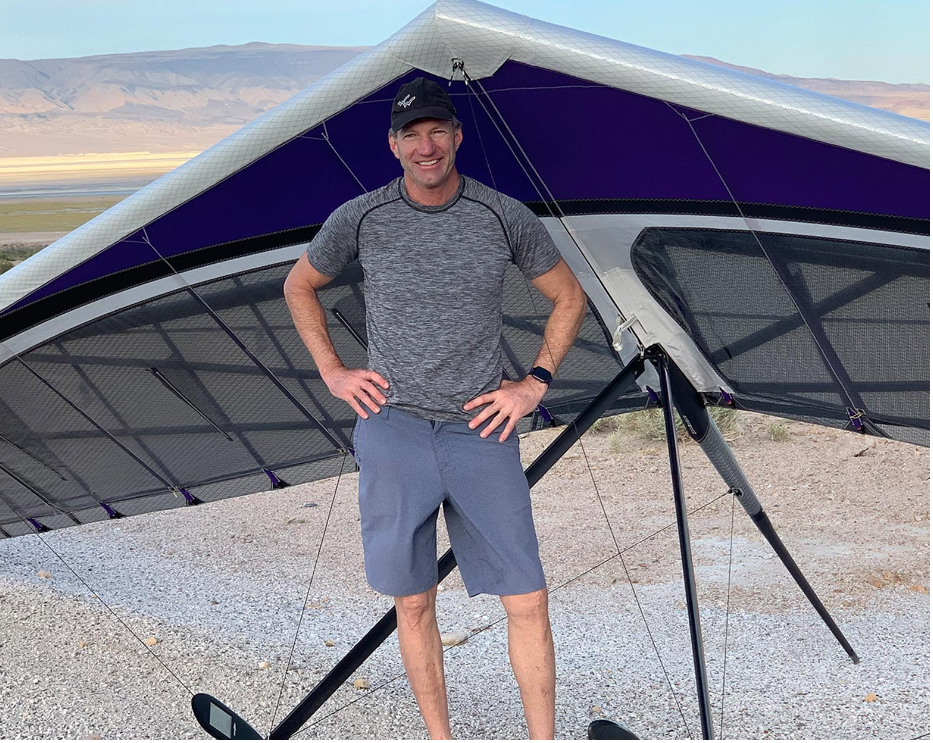 A California man was officially recognized as the world record holder for longest non-stop hang gliding flight by logging 222.22 miles above Owens Valley in California.
Owen Morse, who is one half of the professional juggling duo（二人组杂技团） The Passing Zone with Jon Wee, broke the record by flying his Wills Wing T3 hang glider over the Sierra Nevada mountains of eastern California on June 19. “This flight was a dream that came true for me,” Morse said.
Owen Morse was seen above taking off from Walts Point in Owens Valley, California. “For six years I’ve been chasing the world record, and this year, all the pieces of the puzzle finally came together beautifully.” It took more than nine-and-a-half hours for Morse to complete the course. He managed to reach speeds of up to 50 miles per hour while flying his way through the Owens Valley. The Federation Aeronautique Internationale (FAI), the world governing body for air sports, including hang gliding, reviewed Morse’s flight data and confirmed his record-breaking trip.
“My past tries had failed for a number of reasons—thunder storms on course line, a NOTAM because of a nearby forest fire, which is an official notice to pilots for safety, the flying equipment failure, and flying too slowly,” Morse said. “It takes a lot of things to go right to have success, and one important thing going wrong can be the end of it all.”
Besides hang gliding, Morse is also a professional entertainer. To date, he and his partner Wee have won 18 gold medals from the International Jugglers’ Association.
本时文内容由奇速英语国际教育研究院原创编写，未经书面授权，禁止复制和任何商业用途，版权所有，侵权必究！（作者投稿及时文阅读定制请联系微信：18980471698）
请先登录
最新评论
点击显示
本文翻译请先完成本篇阅读