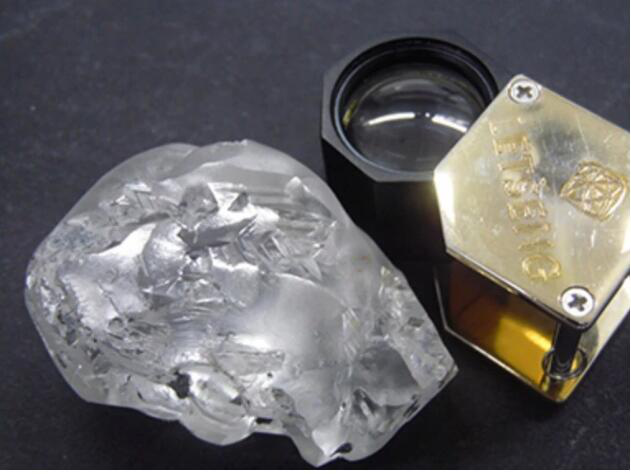 A miner in Africa has found a 442-carat(克拉) diamond that could be worth up to $18 million. Around the size of a golf ball, the huge gem stone is believed to be one of the largest diamonds mined this year.
Mining company Gem Diamonds discovered the gem stone at its Letseng mine in the small nation of Lesotho. Gem Diamonds boss Clifford Elphick described the 442-carat stone as “one of the world’s largest gem quality diamonds to be recovered this year”. “The recovery of this great diamond is further confirmation of the value of the Letseng mine," he said. The diamond is the largest one that the company has found since its 910-carat "Lesotho Legend", which sold for $40 million in 2018.
It will be shipped to Antwerp, Belgium, where it's expected to be sold next month. Edward Sterck, an analyst at the firm BMO Capital Markets, said the gem could be worth as much as $18 million. A part of the funds from its sale will go towards a local community project, Gem Diamonds said.
The company is partnered with the government of Lesotho. With a population of just 2 million people, the nation is known for its open pit mines that produce large diamonds. The biggest diamond found this year was a 549-carat stone unearthed by Canadian firm Lucara Diamond from its Karowe mine in Botswana. The Queen is the proud owner of the world's largest diamond, the Cullinan Diamond, which weighed an amazing 3,106 carats before it was cut.
本时文内容由奇速英语国际教育研究院原创编写，未经书面授权，禁止复制和任何商业用途，版权所有，侵权必究！（作者投稿及时文阅读定制请联系微信：18980471698）
请先登录
最新评论
点击显示
本文翻译请先完成本篇阅读