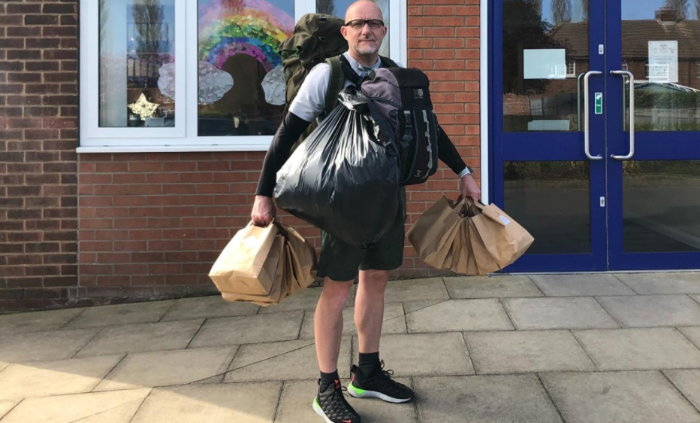 Since schools have shut down because of the COVID-19, teachers have to change their lesson plans and teaching methods to meet the new needs of students. The school closures have influenced not only just students’ learning environment but also their meals to eat.
Most schools have come up with creative ways to make sure their students are still fed. But, Zane Powles, an assistant headteacher at a school in England, may take the prize for the most dedicated, because by the time the term ended in mid-July, he had personally delivered 7,500 lunches to students.
For 17 weeks, every day, Zane would arrive at school around 7 am and start preparing lunches for 100 of his students. Once they were ready, he spent two hours delivering them to the students’ homes. He said he delivered half by car and the other half on foot, walking around 7 miles a day. He said, “When I started these walks, I was concerned about the kids and their well-being and I wanted to make sure I could see them all. I needed to know if they were safe, if they were healthy, and if they had access to food.”
Even though Zane knows his students have another way for food, he is still working to support kids with food insecurity. He started raising money for two charities in England that help provide meals to students when they’re not in school. He believes kids should be taken care of and that it’s part of his job to do his part to make sure that happens. He said, “In the summer the children’s struggles are invisible to us because we don’t see them, but it’s essential that we make them safe.”
本时文内容由奇速英语国际教育研究院原创编写，未经书面授权，禁止复制和任何商业用途，版权所有，侵权必究！（作者投稿及时文阅读定制请联系微信：18980471698）
请先登录
最新评论
点击显示
本文翻译请先完成本篇阅读