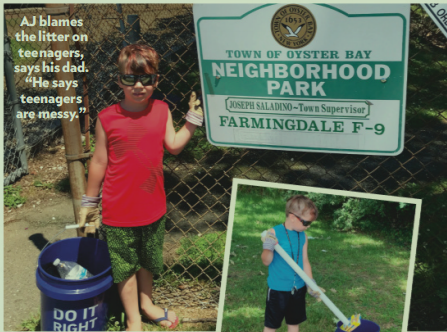 A 6-year-old boy AJ Retaleato is taking action: He is spending his summer picking up litter in the parks and schools nearby. “He woke up one morning and said, ‘I want to clean the park. I feel bad for the earth,’ ” says AJ’s father, Anthony, 56.
With buckets and gloves, the father and son have already cleaned up nine parks and schools, and they don’t plan on stopping anytime soon.
AJ’s town recently praised him for his good job in a special way. “My wife and I both don’t know what to say,” says Anthony. AJ’s favorite part? “I don’t want kids to get hurt on broken glass,” he says. “And I like how clean it looks when I’m done.”
本时文内容由奇速英语国际教育研究院原创编写，未经书面授权，禁止复制和任何商业用途，版权所有，侵权必究！（作者投稿及时文阅读定制请联系微信：18980471698）
请先登录
最新评论
点击显示
本文翻译请先完成本篇阅读