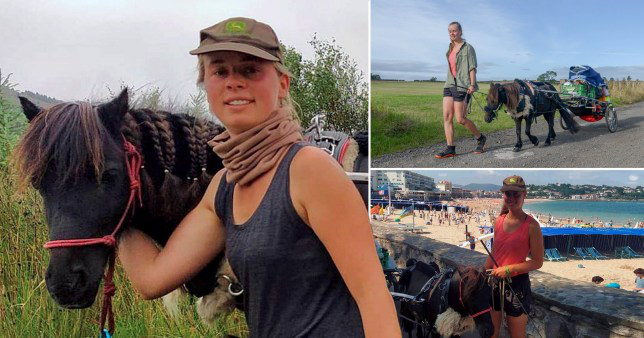 A student Johanna Maria who could not bear to leave her pet Shetland pony behind is hiking from Spain to Scotland on foot. Johanna was accepted into a Scottish university to study agriculture and could not afford £2,000 to transport her beloved Hechizo from Segovia to Dundee. Johanna and the 14-year-old pony set off on the 1,500-mile journey from a farm she had been working at in March. The two have spent the past seven months travelling between 13 and 20 miles a day with a small cart of Johanna’s items. They have camped out and slept at farms and stables overnight and have attracted a large social media following.
Johanna said, “We have amassed a bit of a following on Facebook now and we have been offered lots of places to stay, which is really kind, but it’s difficult tto make plans. We’ve made so many friends and I have felt mostly safe. We have had every kind of weather, lots of wind and rain.” Her father helped them cross the Channel in his converted camper van and they arrived in England on July 13. They restarted their hike in East Sussex on August 1, reached Northumberland on September 3 and hope to cross the border within the next few days.
Johanna, who is originally from Halle, Germany, said, “I have absolutely loved the freedom of it. I really enjoyed walking through the fields, just the two of us, most days not knowing where we would end up in the evening. We have avoided the cities and stayed in the countryside because it feels safer. Hechizo is my everything. I got him for my 18th birthday. He is very friendly, but he knows his own mind. Hechizo means magic in Spanish and this feels like the journey of my life with my magic pony.”
本时文内容由奇速英语国际教育研究院原创编写，未经书面授权，禁止复制和任何商业用途，版权所有，侵权必究！（作者投稿及时文阅读定制请联系微信：18980471698）
请先登录
最新评论
点击显示
本文翻译请先完成本篇阅读