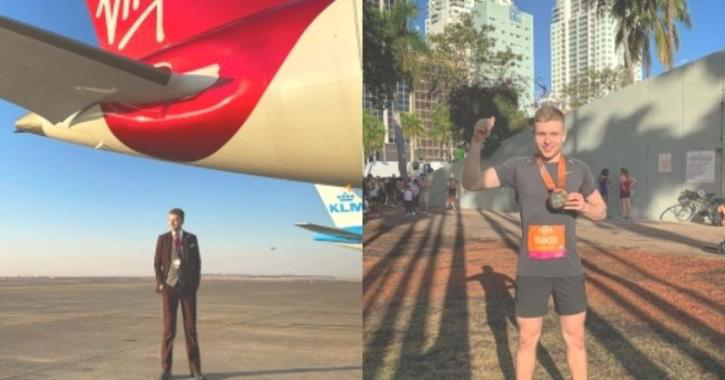 To raise money for cancer support, Henry Kehr ran 20 kilometres inside an empty plane at 36,000 feet. The young man travelled on an eight-hour flight from Atlanta to London in order to complete a half marathon for charity.
Talking about it on Instagram, Henry wrote that it was some of his colleagues who inspired him to take up the challenge. His passion for health, happiness, and fitness have always been a huge part of his life, and now it has become more important than ever, he wrote.
“This year has been hugely difficult for everyone, especially those in the aviation industry. The COVID-19 has had a huge effect on the support of many charities with a lack of fund-raising events so I thought I would try and raise some money for a few charities close to me,” Henry wrote.
Henry said that his mother passed away because of cancer two years ago. He also said that she has always been his inspiration, and taking part in the challenge would be a way to fly high with her as she used to be a cabin crew member herself. “My mum passed away 2 years ago from cancer which changed my life forever. She was cabin crew years before bringing me into the world and by undertaking this challenge, I will be flying high with her every step of the way,” Henry wrote.
He mentioned that this was a different experience for him, “I have run many different races in the past including marathons but nothing quite as crazy as this”. Henry completed the 20-km run in just two hours and 37 minutes to raise over $1,300 in the memory of his beloved mother. People like Henry are an inspiration.
本时文内容由奇速英语国际教育研究院原创编写，未经书面授权，禁止复制和任何商业用途，版权所有，侵权必究！（作者投稿及时文阅读定制请联系微信：18980471698）
请先登录
最新评论
点击显示
本文翻译请先完成本篇阅读