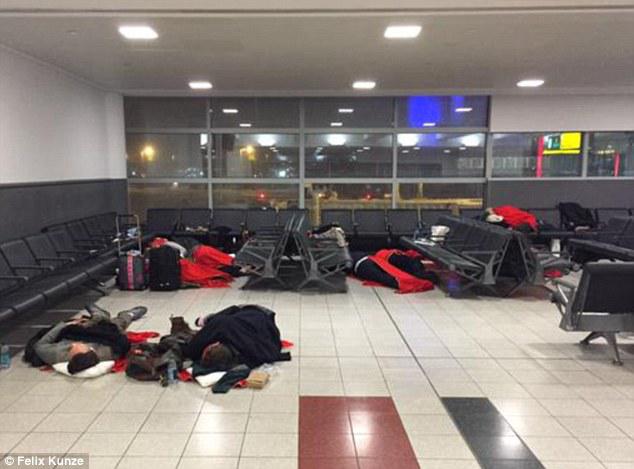 Virgin Atlantic passengers flying from John F. Kennedy International Airport last night were forced to sit on their plane for six hours before getting trapped inside the terminal with nowhere to go.

By the time passengers on the London-bound flight were let off, the plane, roads and public transport had shut down - forcing them to spend the night. The airline said it was unable to get them their luggage and left them with a $15 meal voucher.

“It was like a murder mystery suspense movie - no one could give us any answers,” said one passenger, Alexis Dehasse. “There was nowhere to go. No food and no water.” The music producer was supposed to take Flight VS4 to London at 6.30pm but after the passengers were seated on the plane, one traveler became sick and had to be taken off, he said.

Dehasse said he could have stayed with a friend, but road closures meant he was unable to leave. He said that the crew from his flight left the passengers so they could sleep on the plane. “We weren’t allowed out. That threat of not being able to leave the airport... it was pretty traumatic,” Dehasse said. “The whole thing was a mess.” He added that the staff simply did not know what to do with the passengers. “They knew what was coming so they should’ve had extra staff on the ground,” he said. “They should’ve had a contingency plan and they didn’t. They weren’t prepared.”

In a statement, the airline said that they were “doing everything” they could to help passengers. “The aircraft was due to take off when a passenger required urgent medical attention and returned to the terminal,” they said in a statement through NBC. “Subsequently we de-iced the aircraft again and unfortunately it then developed a minor technical issue, and this meant the aircraft was unable to take off. Due to the severe weather in the region, there is a road travel ban and therefore customers are unable to leave the airport.”