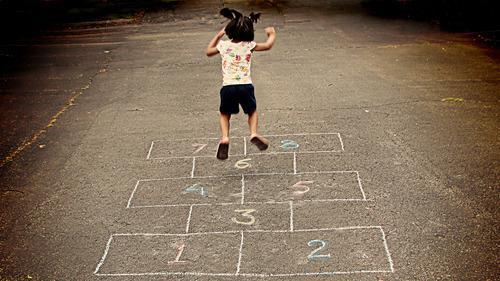 Puzzles, blocks, board games, and pick-up sticks might seem to have gone the way of penny candy and being allowed to walk home from school alone at 8 years old when it comes to today’s kids. But these “old-fashioned” games do something for children that iPads, and the TV never will. They still offer children a better sense of how to manipulate and exist in the world around them. So what are the top five simple games that help build this sense of space?

Battleship: In Battleship, children are thinking about space. They need to figure out which direction their ship is in and how they can use effective questioning to get there.

Hopscotch: This very physical game also involves numbers. Children practice large and small motor skills and spatial relationships as they draw the game with chalk. And then throw their stones and jump along the numbered spaces.

Chutes and Ladders: Many parents probably have fond memories of this game and of rolling the dice and climbing to the top only to shoot back down the slide. But this game is more than just luck and chance and fun. There is a counting, math ability to it all, but also a strong sense of spatial orientation. Where is my opponent compared to me? How can I catch him? What number do I need to get to get there?

Jenga: There was no game more exciting — or more simple — than Jenga. Simply pull a block from the tower and hope and pray it doesn’t fall. But there is so much more to it. Children develop eye-hand coordination and experiment with gravity as well as cause and effect.

Blocks: Give a child an old-fashioned stack of blocks and let them go to town. They are feeling the weight of the blocks in their hands. They are imagining something in their head and making it real. Blocks help children learn how to sense and change the world around them.