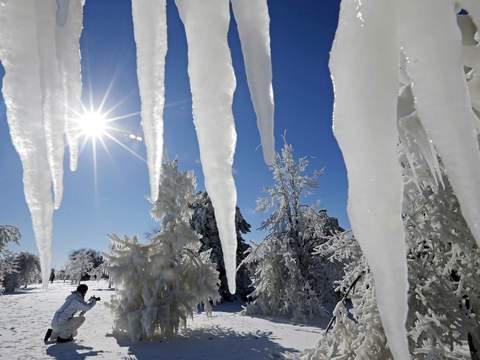 An Arctic front sweeping across the US is bringing misery to millions of Americans in the east and the south and causing temperatures to plunge.

The cold affected millions of people from the Great Lakes to the southern Great Plains. Lake Erie was 90% covered in ice in the past few days, while Lake Ontario was more than 75% covered in ice.

The National Weather Service said temperatures in the mid-Atlantic states and Carolinas could reach lows not seen since the mid-1990s.

In Boston, a city that has seen some 8ft (2.5m) of snow over the past few weeks, Mayor Marty Walsh made an appeal to adults who have posted videos on social media jumping out of their windows onto the snow in their underwear. "I'm asking people to stop their nonsense right now. These are adults jumping out windows. It's a foolish thing to do, and you could kill yourself," Mr Walsh said. North Carolina Governor Pat McCrory has urged residents to stay off ice-covered roads.