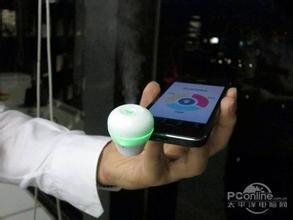 We can express thoughts and feelings and send sounds and pictures on our smartphones today. We can’t send tastes, smells or touch, of course. But scientists in Britain are trying to develop a way for smartphones to do just that.

Adrian David Cheok is a professor at City University in London. He wants people to experience communication using all of their senses. “In the real world, we can open up the glass, open the window. We can touch, we can taste, we can smell in the real world.”

To give users a sense of taste, researchers designed two electrodes that are placed on the tongue. A chemical process creates different tastes through molecules on the surface of the tongue. They have already created sour, salty, sweet and bitter tastes. “You put these two silver electrodes in your mouth, you put your tongue in between and then it stimulates electrically your tongue and you get a virtual taste perception in your brain.”

A device called “Scentee” permits users to have the sense of smell. Scentee plugs into a smartphone and can spray tiny clouds of fragrances, including flowers, fruits and coffee. Professor Cheok says the person speaking can activate the device. “Basically what happens, we have an app, it connects to the Internet and then this will release a scent from your mobile phone.” Scentee holds a container with about 100 different smells. The container must be replaced when all the scents run out.

The sense of touch comes from a ring-like device. It is connected wirelessly to the smartphone. The device sends a soft, electrical squeeze when a person on the other end of a telephone conversation does the same. Professor Cheok says this permits a kind of wireless touch communication. “I can be in London and my friend can be in Tokyo, and I can squeeze my finger and then they’ll get a squeeze on their finger through the Internet. It’s a way of touch communication with small mobile devices.”