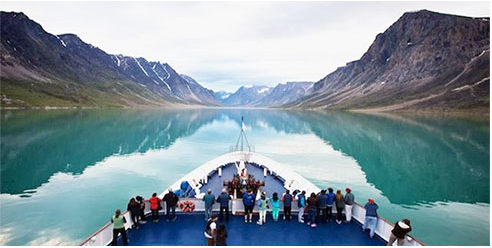 This past summer I went on a journey to Canada’s Arctic with Students On Ice. When I left Calgary I wondered what I would find, what I would learn and who I would meet. On the trip to Ottawa I was wrapped in a blanket of uncertainty and excitement.
But when I first met the group of students, scientists and expedition leaders, I knew that I didn’t have anything to worry about. The group was amazingly receptive and I was soon part of a big family setting out on an amazing adventure— an adventure of a lifetime!
When we reached the Arctic I was overwhelmed with its immensity（广大） and beauty and my senses were repeatedly shocked and amazed.
I stood on the deck of the Kapitan Khlebnikov and saw countless towering icebergs, twelve Polar bears, a few rare Ivory gulls, and mountainous islands. I flew over gigantic/large glaciers and stood on the frozen Arctic Ocean where polar bears walk in search of seal holes, and patiently wait for a meal.
I learned that polar bears are successful only one out of every twenty hunting attempts. I saw a vast land that appeared untouched and original.
However, I learned that the Arctic and its inhabitants are being threatened by pollution and global warming. I learned that pollutants are carried by ocean and air and have a negative effect on all Arctic inhabitants. I learned that global warming has put Polar bears at risk because a warmer climate means that they have a shorter time to hunt seals on the ice.
The trip was a feast for the senses. I have learned more about our environment, and particularly how alive and interesting the Arctic is and why it is so important to take care of it. I learned pollution, ignorance of individual and global problems need to be solved. The Arctic deserves to be preserved. My trip with Students On Ice has made me more determined to try to ensure that I do not leave negative or harmful footprints on either Earth or its people.
本时文内容由奇速英语国际教育研究院原创编写，禁止复制和任何商业用途，版权所有，侵权必究！