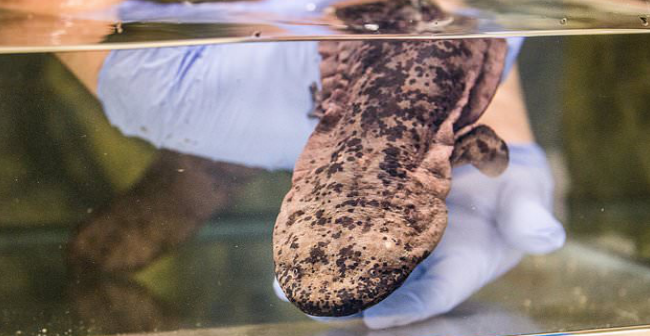 A rare Chinese giant salamander is going on display at London Zoo after smugglers attempted to illegally import the animal in a box. The salamander was one of five endangered amphibians found in a box in September 2016, one of which had already died by the time authorities discovered them.
Border Force asked London Zoo to look after the remaining four and one of those, named Professor Lew, is going on display to the public now. Ben Tapley, the Zoological Society of London’s keeper of amphibians, said, “We work closely with Border Force to identify unusual animals, but even I was astonished to see that they were Chinese giant salamanders—one of the world’s most endangered amphibians. Chinese giant salamanders may not be everyone’s idea of beautiful—I’ve heard them described as giant brown blobs with eyes—but Professor Lew’s purple tail and slimy smile have already made the newcomer a big hit with our keepers, who have been finding any excuse to visit the Reptile House.”
The species is the world’s largest amphibian and is native to mountainous regions of China. Professor Lew, who is thought to be four years old, is 30cm long but could grow to be six times that length, meaning London Zoo has had to work hard to build a brand new enclosure to house the growing youngster.
According to ZSL, the species, which is under threat after becoming a delicacy in China, is “thought to have inspired Chinese dragon legends and even the iconic yin-yang motif”. Mr Tapley said, “They’re definitely unique: often referred to as living fossils, Chinese giant salamanders have remained largely unchanged for millions of years—as the only zoo in the country to have one in residence, it’s a real privilege to be able to introduce the species to our visitors.”